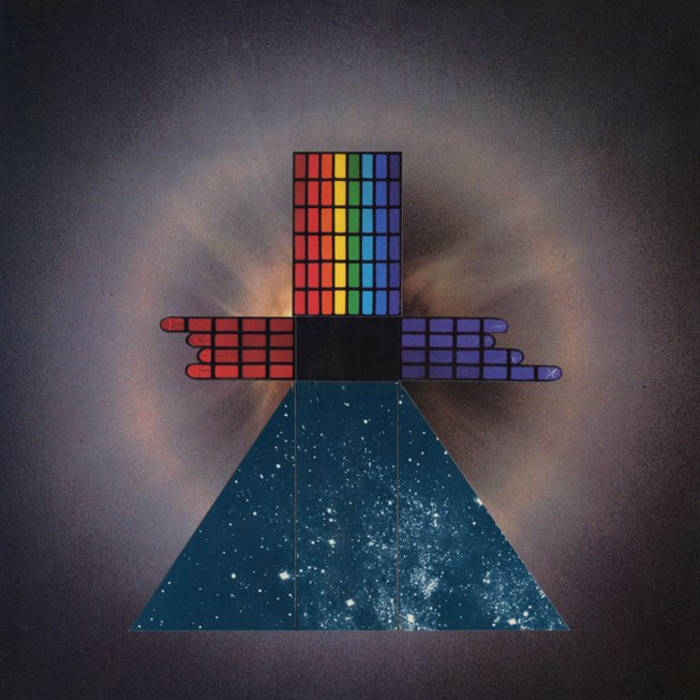 Alohadude Hints of greatness, this is how today's Krautrock should sound. Favorite track: Kanal Telemedial Energieausgleich.

It is said that radio pioneer Marconi believed that sounds never die, they just grow fainter until they can now longer be heard by the human ear. Towards the end of his life, he became obsessed with the idea of developing equipment sensitive enough to hear the past. Listening to Pyramiden von Gießen , you’d believe German outfit Datashock had come into possition of just such a device, which enables the to pick up the fading echoes of early Krautrock jams.

Founded by Pascal Hector around 2003, Datashock style themselves as a loose collective with no fixed membership, who make electroacoustic sounds that combine elements of Noise, drone and folk, as documented on albums on Chocolate Monk, Qbico and Hector’s own Meudiademorte label. But this latest release marks a drift towards a retro sound and a more conventional line-up of guitar, bass, drums, violin and lashings of Kosmische synth. Across these long, slow-building tracks, they’re clear seaking to connect with a Krautrock heritage. The overall mood recalls the opening swirl of Amon Düül II’s Phallus Dei but, rather than blooming into spiky acid Prog, Datashock’s tunes generally surrender up primitive drum beats and simple grooves that recall vintage Sunburned Hand of the Man – they even borrow some of John Moloney’s echo-drenched cosmic sermonising – but the slide guitar and rolling drums on tracks like “Chiahonania Leder Boots” reveal the more overtly American influence of Jackie-O Motherfucker.

One on level, this is Krautrock as perceived through a prism of nostalgia and secondhand reinterpretation. Yet at their best Datashock strike close to the heart of the original vision: the ascending groove heavily dosed with wah-wah guitar on the 20 minute closing track “Schlupp vom grünen Stern” could pass for a lost Ash Ra Tempel Session – albeit one lacking their supercharged drumming.

Like the Original recordings of Amon Düül or Sunburned Hand of the Man, it could have been sliced from an endless, eternal jam. But you’d need a Marconi-Styled device to tune the rest of it.

To call German titans Datashock’s new LP immersive is an understatement as enormous as the album itself. Firstly, it’s a krautrock album in 2011, which, by definition, implies a certain element of insanity and grandiosity. Secondly, it’s a double-LP release, which means, these guys are playing enough music and jamming long enough to fill up four full sides of wax. To put it plainly, this is not a record for the weak-hearted. This thing is a full-fledge supernova. For those of us who will partake in this album, the listening experience is nothing short of revelatory. For 80 minutes, the fun does not let up. Every piece of this record is just fantastic and huge – so many epic build-ups that you might find yourself hearing echoes in your head days after. And Datashock gives listeners everything we want – extended synth workouts, funky rock anthems, and enough celestial exploration to send even the deepest space-head into a blissful trance. Not to mention the album’s slow-burning centerpiece “Kanal Telemedial Energieausgleich,” which is one of the most flat-out gorgeous pieces of music I’ve heard all year. So, yeah, it’s an enormous record – one that feels not just like a great piece of music but also like a total sonic event. Anyone who finds krautrock and kosmiche music to be even remotely interesting is bound to find something they love here. If you’re willing to take the journey, Datashock is more than willing to lead you along and keep you smiling every step of the way. 9/10 www.foxydigitalis.com/foxyd/?p=11012

Oo what’s this be-gatefolded Kraut-outing I see before me emblazoned with manicdotes and universe of seemingly some other lost time, its colossal sonic ooze ritualizing our cranials and Dynorodding our deepest secret fears, then? Hell, it’s PYRAMIDEN VON GEIßEN, the fucking brand new German double-vinyl epic commune sprawl from Berlin/Hamburg ensemble Datashock, and it’s a splendidly righteous motherfucker with futuristic lobes for pointy-headed people. Don’t know what they put in the wasser during this Datashock sesh, but it kicks Balzac in the ballsac and I want some now or a tantric tantrum approacheth. Kiddies, you doshed enuff this month for just one purchase, perchance, then make sure you buy THIS motherfucker, got me? You’re on the dole you, you NEED new music it’s this one. Why? Because not only comes its sound from the bowels of the fucking Absolute, but it’s all housed & decorated like these visionary motherfuckers truly CARE! So grab your bargain by rushing to Dekorder Records’ website at dekorder.com, or hassle those beasts themselves a tmyspace.com/datashock.

Datashock‘s immense double LP, Pyramiden Von Gießen, has been floating around since mid-April, but for an album this sonically sophisticated, this stylistically diverse and experimental– and captivating to the very core– it can take a full two months to mine its riches. Datashock is a fluid collective of at least ten German musicians, and in the most sublime, exultant passages onPyramiden, it feels they have all synched into a secret rhythm and language– like a musical flow that undulates only within them. The nine-minute “Lasagne Phalanx,” one of the shorter cuts on the hour-plus record, is preluded by a four-minute intro of siren-like synths that fry into your brain. The rhythmic interplay of guitars rises over a foundation of soft, delicate drones, with distant chants floating even higher still. The track’s perfect blend of electronics and acoustic instruments echoes the psychedelic and Kraut stylings of A.R. & Machines, and allows slowly enveloping layers of sound and swift build-ups of pace to lure the listener to that transcendental space. Indeed, under the description of Datashock on the Dekoder website, Jürgen Ploog writes that in the terrains of music, “the traveler rides on waves of sound, while losing his last pieces of baggage, experience and the identity familiar to him.” Listening to “Lasagne Phalanx,” and to Pyramiden as a whole, evokes this feeling in the grandest of ways. Through the miasmic incantations, the chilling gusts of synths and the beating of the drums, it’s as if Datashock are playing back to a place well beyond baggage, before (or after) personal identity, with only vast musical panoramas and vistas to behold for the inquisitive wanderer. –Daniel Gottlieb, Altered Zones

Mike gave this 5/5. Yes! This is great! A new double-LP from the German hippie-punk collective Datashock. This is a gleefully experimental semi-improvised krautrock epic. Considering that the tracks were performed live by a nine-piece band there’s a real sense of pace and restraint and communication which is really engaging and it rarely gets cacophonous; the live instruments don’t seem to even be introduced until midway through the first side, and their combination of live instruments and electronics kind of treads a middle ground between Supersilent and some of the recent US bands like Sunburned Hand of the Man or Raccoo-oo-oon. Sometimes it even brings to mind Hawkwind at their most out-there. It’s deeply psychedelic but the songs don’t outstay their welcome and there are enough hypnotic rhythms and subtle melodies to hold my attention. It’s great to hear this style of explorative music played with such a combination of youthful exuberance and mature restraint. I can see this becoming a l! ate-night staple in my house

This latest from German weirdos Datashock must be what it feels like to double drop the blue pill. From the first couple of notes of ‘Intro/Lasagne Phalanx’ it’s pretty clear that the extended collective of prog folkies are vying to drag our unconsciousness through the rabbit hole before exacting all manner of mental tortures. It’s probably worth it though; with the gritty, bass heavy backdrop of classic Amon Duul II (I’m talking Yeti here, none of those later-period bootlegs) and the ragged free psych charm of Datashock’s American counterparts Sunburned Hand of the man they retain an unnatural charm throughout ‘Pyramiden Von Giessen’. It somehow makes sense to me that the record should emerge on Hamburg imprint Dekorder (home of Black To Comm), I can hear parallels with Marc Richter’s own frazzled compositions, and the more you let yourself drift into this sprawling work, the more abstract and surreal it becomes. Like an oil painting, it requires a change of focus – once you see/hear it, you won’t be able to let go.http://boomkat.com/downloads/404449-datashock-pyramiden-von-gie-en

Here we have 10 tracks of krautish magmatic crinckling. The sound does not expand but seemingly strikes into itself. Glancing electronics and twiggy faded guitar plunks create some kind of hardpan for the whole record. Each track possesses a fissile and progressive organic system appearing a nice bait for unhep and a bit lo-fi drums. Who’s a fucking king here, ha? Give me the name! Dotty-botchy criminal tunes are here to fill up the gap wich’s sucking the world into a small wood box where everything becomes a part of the clown’s costume. This amazing record balances between some criticalness of philosophical approaches (which are always subliminal in sound art) and easiness of fresh and dancy meditation. I give up tho. Dance smart, folks! Datashock is a collective of experimentalists from Germany. Buy the record from great Dekorder. dumpsterdivingblog.blogspot.com/2011/05/datashock-pyramiden-von-gieen-2lp.html